Lets get some of the background and details out of the way before I discuss team pixels strategy and why it failed us in the final.

"Starting as a small group of colleagues honing their skills has become a community of developers who compete for fun and for glory. Battlesnake grew from a single, yearly event into a global, open-source community that's active year-round. The game is a multi-player version of the classic arcade game Snake, where teams program a snake AI to compete against others. The winner is the last snake slithering." Source

At the time of this post I am a recent grad (June 2018) from the Information and Computer Systems Diploma Program from Camosun College and a Junior Web Developer for a local start-up Lauder Media Inc. A family man with three great children and a wonderful wife and love to work on my development skills in my off time playing with different languages and frameworks.

I was in my first year at Camosun College when I first heard of BattleSnake from a group of the event coordinators that came into our class and spoke about BattleSnake. I was hooked when they said BattleSnake AI.

Not knowing how to get started or really much in programming at all (I had zero programming knowledge prior to my enrollment at Camosun) I attended their tutorial. This in turn lead me to their event documentation and there was a link to the winner of BattleSnake 2016. I forked the GitHub repository and altered it to fit the data coming in from the requests on game day. I managed to get it working but not good enough, which leads use to the moral of 2017…..

Having no experience and trying to alter an existing snake is NOT the way to do things, I will discuss more on this later. A couple of notes on why this was not an optimal choice for me would be:

Although the experience and atmosphere were out of this world I did not do well in the competition and started regretting my choice immediately after I was knocked out of the running. Planning to get better by the 2018 competition.

Into the second year of my program and BattleSnake2018 approaching I was feeling pretty good. I decided not to start from scratch and continue with the snake I had used in the previous year….(yeah yeah don’t worry we will get to that poor choice in a minute)

Throughout the previous summer I had some time to understand to some degree what the existing code was doing. It was enough that I could add some extra actions and “make it work”. (doh!) I know your thinking it too!

Walking in head held high because I got a few extra things happening with the current snake. I was so high on my horse I entered the intermediate bracket fully believing even with the lack of understanding of what my snake was actually doing I was going to dominate.

Yep you guessed it I actually did worse that the first year and the developers in that bracket far outweighed my knowledge of development. Another loss right away ... I was officially put in my place.

Despite my second failure the event was outstanding yet again. More developers more sponsors, more networking and great times. Yet I still had that looming feeling of failure. Fool me once jokes on you, fool me twice jokes on me! 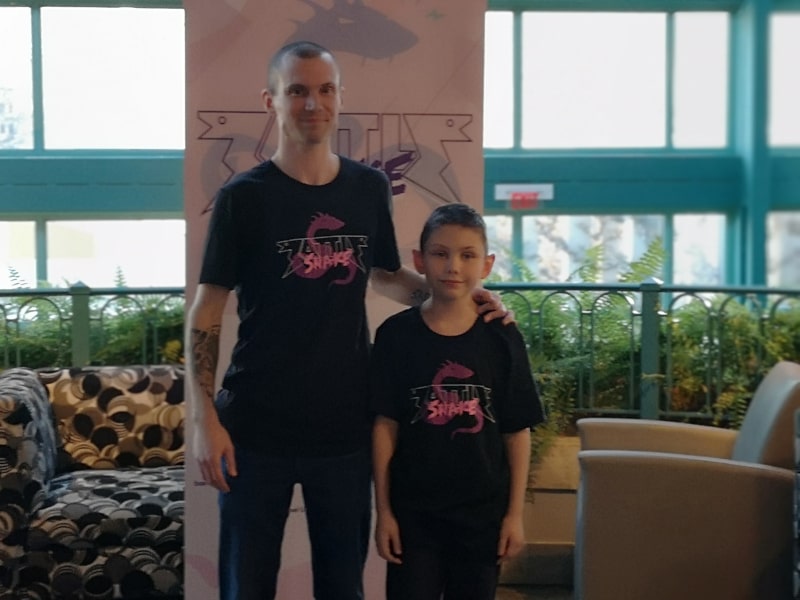 Spoiler alert -> we placed 2nd!!! Would have gotten first but I’ll cover that after my looking back section later.